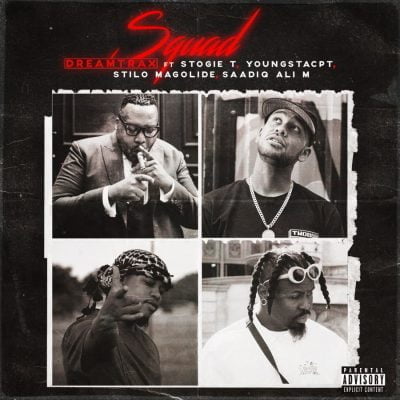 That wasn’t the aforementioned case with trio producers ‘Dreamtrax’ involving Tru Hits, Co Kayn and Streets Carnivor. The three musicians decided to hit fans with a surprise release titled Squad. Featured on the track are StogieT, YoungstaCPT, StiloMagolide & Saadiq Ali M who contributed perfect tidbits to turn this into a killer joint.

The combination may seem unlikely but isn’t that part of what makes music great? When various elements, vibes and tunes are fused – something spectacular comes out. Dreamtrax Squad is an apparent proof.

My production teams guys dropped something for y’all to f*co with. Dunno where they got verse from? Shout to everybody on this scorched,
wrote Stogie T

AQ leads the hiphop category for the 13th HEADIES Awards with 3 nominations.