The African hip hop community is in shock to hear the news of passing of Mzanzi rapper and fashion icon Rikhado Muziwendlovu Makhado popularly known Riky Rick who was found dead in his home by friends. The rapper who just signed a mega-deal with African Bank and has his Cotton Fest on the way was found hanging in his residence and was quickly rushed to the hospital but was reported dead on arrival and reportedly Suicide.This news comes as a shock as the rapper has been active lately on social media with several post and announced the pleasant news  of his latest endorsement to his hip hop fans. 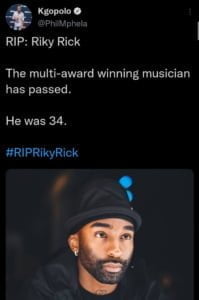 Hiphop Africa team has his family in prayers.