Zoro, the Nigerian rapper who wants to take Igbo culture to the world

The rapper also says that everybody needs the Lagos market.

While he admits that he’s still trying to find his feet in 2019 as regards music, he claims that while the East is his bigger market, the dream is to take Igbo culture to the world.

He said, “The dream has always been to be different. As much as I tend to forget sometimes, I’ve always wanted to create an impact – from onset, that has been the drive. When ‘Ogene’ (his hit) came, it was just me trying something different, not like it’s something I’ve known from birth.

“It came, it happened, I wanted to expand it… The dream is not to be the king of the East, no. The dream is to take Igbo culture to the world. So I became very big in the East, but to me it was no longer challenging, I needed more, so I had to expand.”

But as Nonso Amadi said in his chat, you cannot take your music to the West without first having a grounding in your own country. So for Zoro, going to the world might require taking the biggest Nigerian music market first – Lagos.

“I think it’s taking time, but I’m beginning to understand what really works here. And then Lagos is like the heart of entertainment in Africa. Anybody that has the opportunity to be in Lagos is supposed to be here.”

Zoro tells Pulse how his single, ‘Up and Down’ featuring Mr. Real came about. [PULSE NIGERIA]

On how he came to work with Mr. Real on his song of the moment, ‘Up and Down,’ Zoro says the music came from how he and Mr. Real clicked when they did One Africa Music Fest in London, and not for any real need to chase trendy sound.

He says, “I think what brought about me having Mr. Real on the song is the connection we had when we did One Africa Music Fest in London. So, we clicked and we even stayed in the same apartment. So we kind of bonded and it went beyond having the biggest song as at that moment to the vibe we had as brothers and Nigerians.

“I came back and said I have this song that I’ve always wanted to put out, so I sent it to him and he liked it, he came to the house and we recorded.” 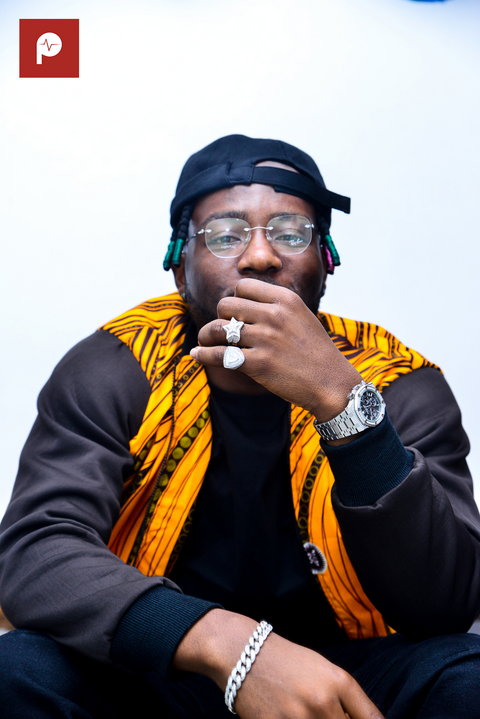 The rapper says he would like to work with Zlatan and Naira Marley because he likes taking risks. [PULSE NIGERIA]

On making music with Zlatan, Naira Marley and the trendy guys, he says, “It’s something very different from what people think I do. I have always known myself as someone who loves to try things. ‘Ogene’ the song that brought me out wasn’t the thing I started with, but I tried something new and it worked. I don’t like being caged.

“That’s why I think it will be nice to have them Zlatan and Naira Marley on songs, the style is different.”

Nigerian music has changed. These days, you don’t need an album to be successful anymore – all you need is a popping song. Zoro agrees, but he also suggests that a popping song is the only reason he would drop an album.

He says, “I think the way it works in Nigeria, you need to be popping (before you drop an album) if you’re a businessman. But if you don’t care like the people that make sales online – (for example) the alte people who have their crowd and all that… But asides that, if you’re a street boy like me, you need to have something popping and then go with an album.

“You need to put out an album when you have some buzz, but there are no rules to this thing.”

VIDEO: Medikal – Time Changes Rapper AQ is out with a blazing single “GOD’S WORK” as he share an interesting look to the joynerlucas version of “DEVILS WORK”